Introduction
I began blogging on Thursday 26th of August 2010, some nine years ago. Within this time I have published (including today) four hundred and fifty-two posts. It is no wonder that one of Henry Lawson's poems (an Australian poet) has suddenly rushed into my mind.

The night too quickly passes
And we are growing old,
So let us fill our glasses
And toast the Days of Gold;
When finds of wondrous treasure
Sets all the South ablaze,
And you and I were faithful mates
All through the Roaring Days!


To all the followers of this blog, I now give you one year warning! Next year will be my tenth year of blogging and for the first three of my followers to respond to my clarion call in the last week in August of 2020 on my tenth anniversary of this blogspot, each will receive one of my fat quarter ArtCloth textiles. Beware and be prepared!.

This is my four hundred and fifty second post and for your convenience I have listed below the other annual reviews that span the life of this blogspot.

Not all of these categories are present in any given year (e.g. Artist Profiles, Fabric Lengths and Opinion Pieces etc did not make an appearance this year). Also judging a post by the one criterion - most amount of views - is not necessarily the smartest approach, since the length of stay might mitigate the former statistic. How often have you heard yourself say - oops I really didn't mean to google this hunk of a man when I searched for "loincloth!" Nevertheless, this one statistic makes matters so much easier for me and so it will be used as the final arbitrator, except when two post differ by less than two views - I will then declare both as winners!

ArtCloth Textiles
There was only one post in this category in 2018-2019 period and that was Man-Made Fish Kills My New Hand Printed ArtCloth  Dyptich . My ArtCloth dyptich is my tribute to the fish of the Murray-Darling Basin whose lives were cut short by this man-made ecological disaster in 2019. One species, the Murray cod is the largest exclusively freshwater native fish in Australia, and one of the largest in the world. Many live beyond 40 years of age and yet we managed to destroy them because our management of the river systems is diabolitical. 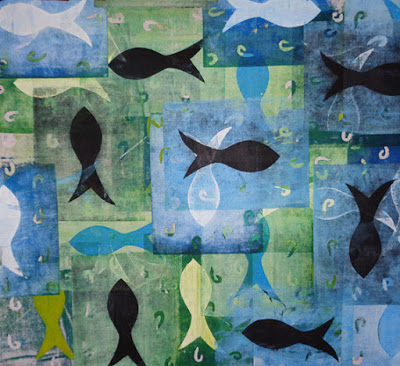 Art Essays
This was a hotly contested area since there were more posts in this area except for the Art Resources series. The two most popular were - Contemporary Japanese Textile Creations and Western Culture Categorization of Gender - with the latter being a winner by a long margin. 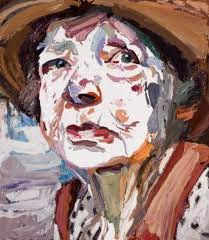 Art Exhibitions
There were two posts on exhibitions namely, 2018 CrossXpollinatioN "Journeys" Exhibition and my exhibition at the same venue, namely, Timelines: An Environmental Journey with the latter doubling the number of views of the former. It is clear my fellow ArtCloth artists wanted to know what I was up to and so I hope I did not disappoint them. 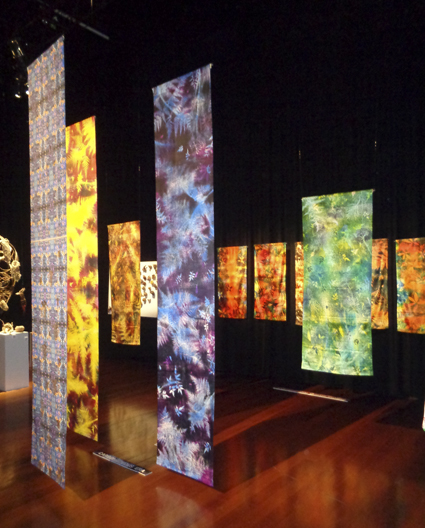 View of the installation, Timelines: An Environmental Journey, from the right hand side of the ‘Black Box Theatre’ (Colac, Victoria).

Art Resources
Once a month an Art Resource is published on this blogspot. The Art Resources that are published just after the Annual Review are always the favourites to win, because they normally have a year to gain an audience, whereas the art resource published in the month of the review only has a fortnight and so normally gains a much smaller audience.
The two contenders for this category were: Additive Finishes and Knit-Sew or Stitch Through Fabrics with the latter being a comfortable winner! 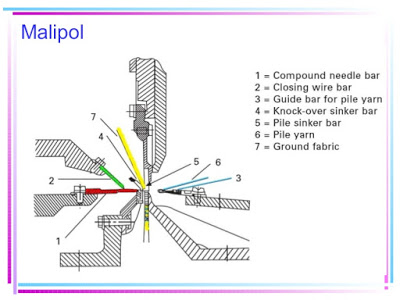 Art Reviews
There were two posts in this category and they were Hawaiian Quilts - Part III and Yuzen Arabesque Patterns (Part IV) with the latter having more views. This was the fourth post in the series and viewers cannot get enough of these intricate and subtle Japanese designs. They just capture the imagination and make you want to go into the studio and do your own stuff! 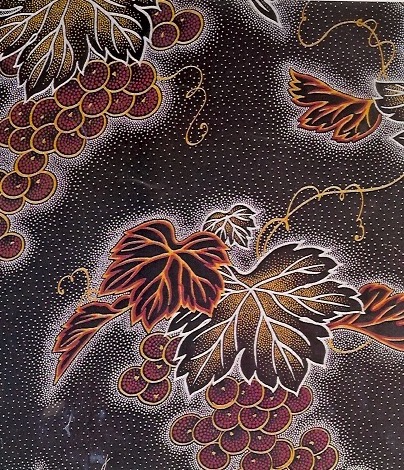 Book Reviews/Interviews
There was only one book review/interview this year and it was my review of Kalle Gayn's novel, 4 Steps To Freedom 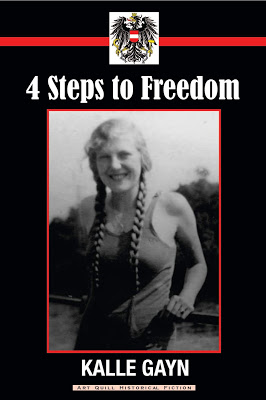 He dedicated his novel to me, which hardly makes me an unbiased interviewer!

Craft and Quilt Fairs
There was only one post in this category and that was Art Quill Studio@2019 Melbourne Craft & Quilt Fair . These venues are a lot of hard work since prior to them you are producing copious amounts of ArtCloth Textiles (from fat quarters to fabric lengths to wearable art etc.) You are standing on your feet for hours on end, and so at the end of the day you are totally exhausted. Why do it? It's not just for the money or for the exposure but when you have a grandmother buying her granddaughter a scarf you have made that the grandmother knows is expensive because of its uniqueness ($150) but nevertheless will outlay that sum of money to thrill her granddaughter, it makes you feel like you have become a part of a special connection. I say to the purchasers of my ArtCloth textiles: "They started out white but white is not my favourite color and so I changed them! Once you purchase this scarf and you wear it, you will never see the same scarf walking towards you!" 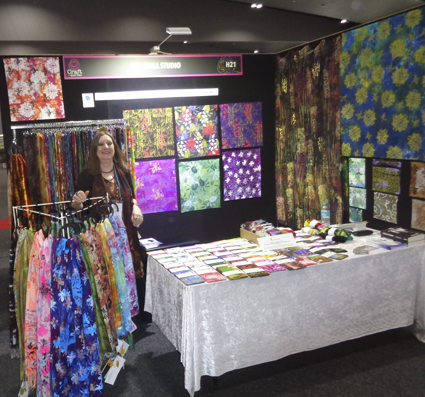 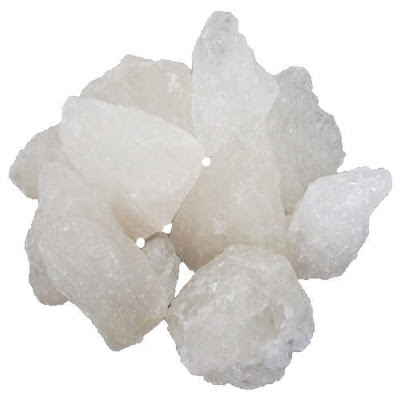 Glossaries always attract a lot of interest since they provide a wealth of information and so are often favoured by search engines when internet users are making enquiries within their realm. There are now eight glossaries/data bases on this blogspot for you to explore. 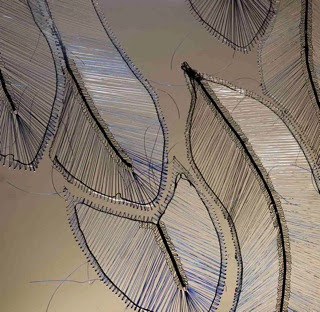 Guest Editors
There was only one post in this category and that was guest editors Judy Newman and Clare Mooney who wrote a post on: ArtCloth Textiles Created by Marie-Therese Wisniowski. 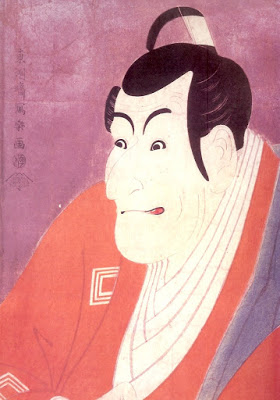 The actor Ishikawa Ebizō (1794) by Tōshūsai Shark (active from 1794 - 1795). The Ishikawa were one of the great acting families of Japan and can frequently be identified by their distinctive red costumes decorated with concentric white squares.

Resource Reviews
There were three posts in this category with A Textile Tour of Japan. Part I - Tokyo and its Surrounds and Tarndwarncoort (Tarndie) with the latter being the most viewed. 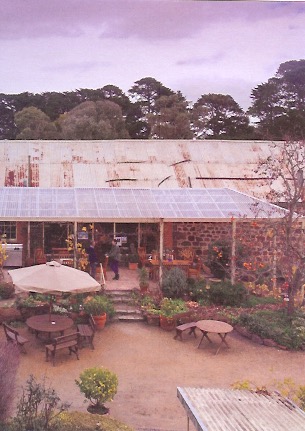 A partial view of the coffee shop/wool shop/gallery complex at Tarndwarncoort.

People just love old homesteads that have been converted into galleries/coffee shops.

Effective use is made of curved lines to enclose shapes and form design styles.

Wearable Art
There were two posts that dominated this category and they were within such a small margin (one post the difference) that both must be declared equal winners. I love this post Australian Aboriginal Printed Clothing which displays some wonderful designs. 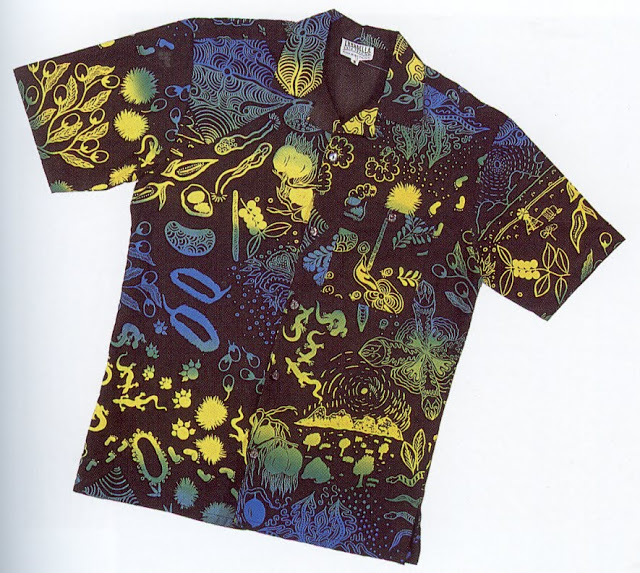 The other post featured some of my wearable art, namely My New Hand Dyed and Hand Printed: 'Rainforest Beauty' Pashmina Wraps Collection. 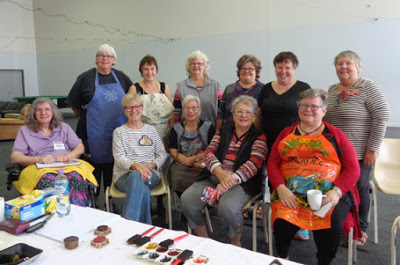 Go and visit this post and you will experience the wonderful output of these talented artists.
Posted by Art Quill Studio at 7:00 AM

'Art in Our Community - Printmaking'
Museum of Art and Culture,
Lake Macquarie, NSW. 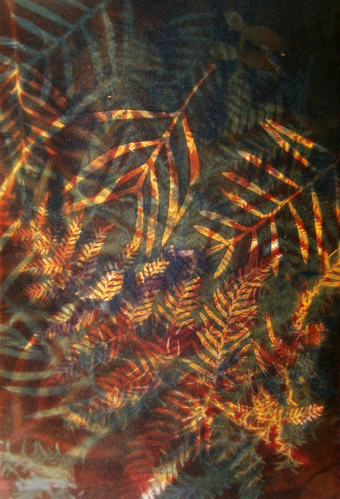 Marie-Therese’s print - ‘Shadow Play’ - was selected for the ‘Art in our Community - Printmaking’ exhibition at the Museum of Art and Culture (MAC) Lake Macquarie, NSW.
The print features her signature hand printed MultiSperse Dye Sublimation (MSDS) technique employing disperse dyes, native flora, and low relief items on satin substrate. The exhibition runs from the 13th February to the 16th May 2021.
Click on image to get an insight of its creation.

A Phoenix Rises by Kalle Gayn 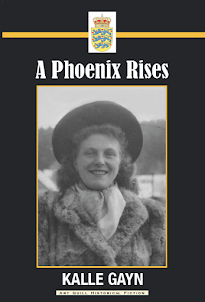 Art Quill & Co has published the third novel of the Magrete trilogy, A Phoenix Rises. This novel would be considered to be in the historical fiction camp. A stand out novel in this genre is 'Dr Zhivago'.
To know how to purchase this novel or the trilogy, click on the above image. 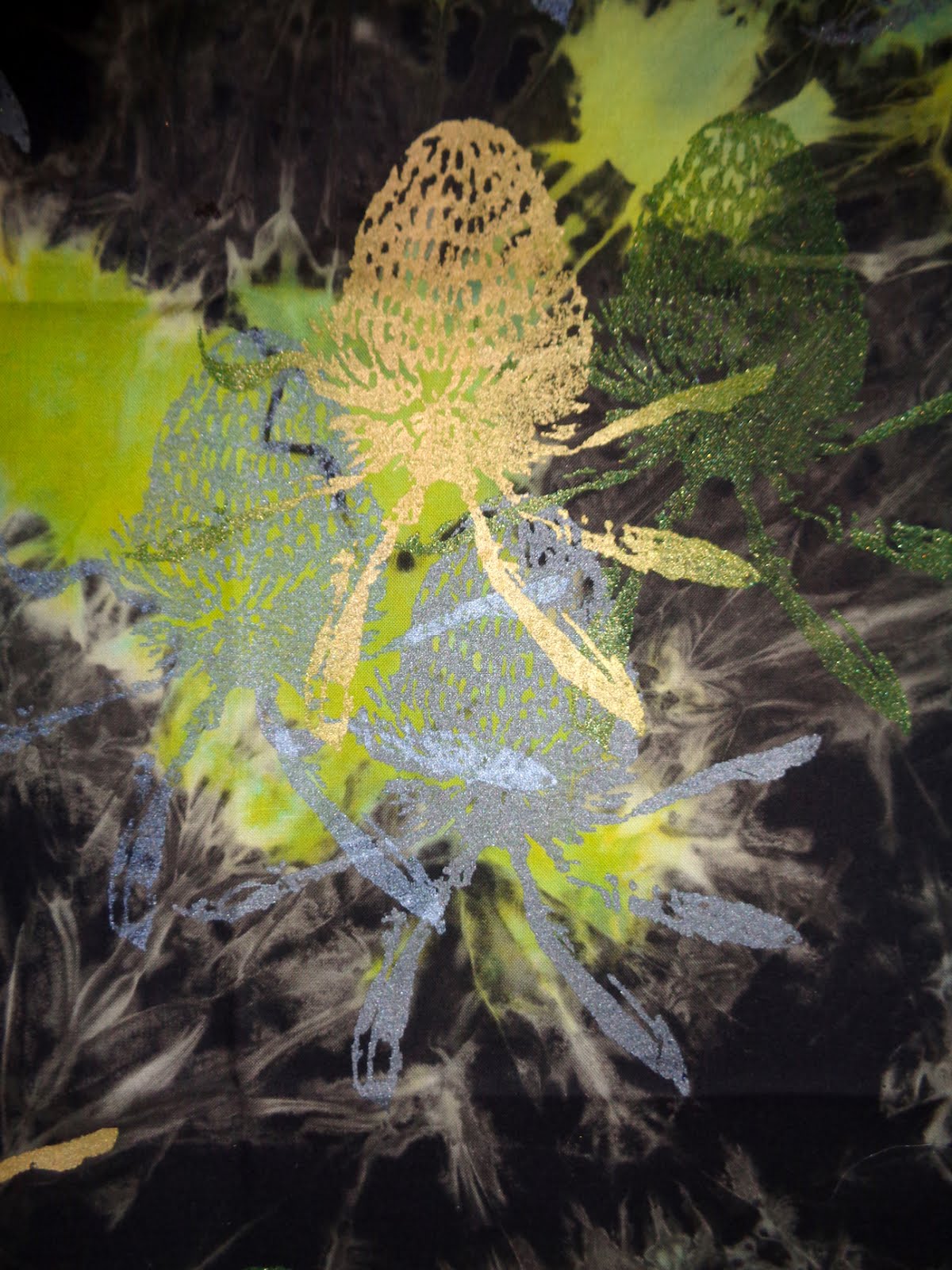 Marie-Therese was invited to participate in the ‘Flora’ exhibition which includes various exhibitions and installations across the City of Greater Dandenong including Walker Street Gallery and the Heritage Hill Museum.
Her featured ArtCloth, ‘Banksia’s amidst the Lichen’ is based on one of Australia’s truly unique flowering native plant species, the Banksia (the image shows a detail view of the artwork). The piece has been multi-dyed, over-dyed and screen-printed employing metallic pigments and gold foil on cotton. It measures 115 cms wide x 150 cms high. The exhibition runs from the 25th March to the 1st May 2021.
Click on the image to get information about the Museum. 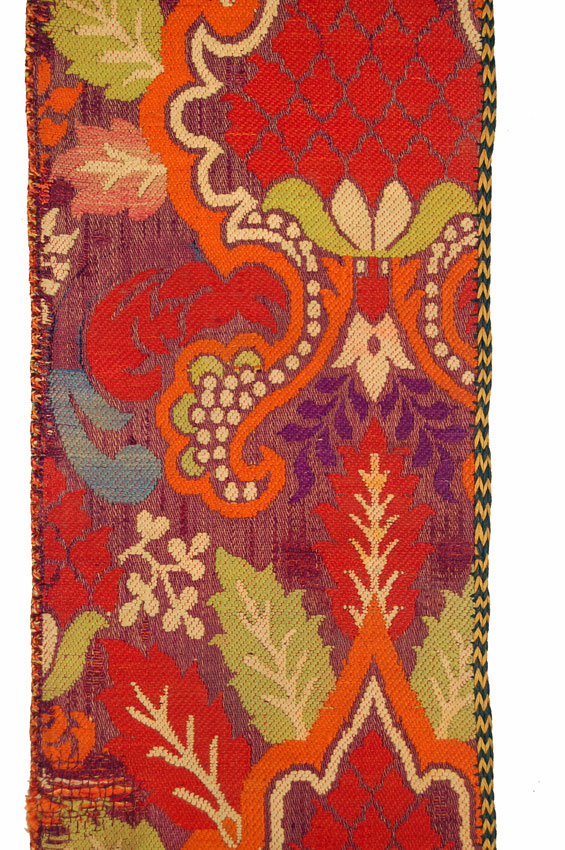 The Glossary of Fabrics, Fibers, Finishes, Garments and Yarns is highly focused, containing definitions and terms pertinent to the specific categories in the title. Above is a rigid Fez sash worn by women all over Morocco on ceremonial or festive occasions. The design is composed of floral patterns combined with heraldic motifs derived from Hispano Mooresque architectural elements plus abundance of hamsas and eight point stars.
Click on the image to view the post. 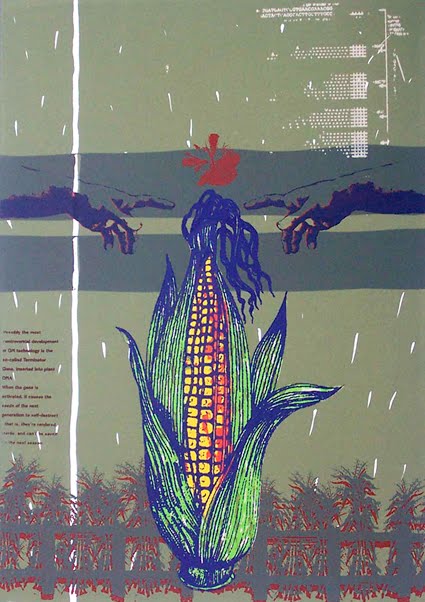 Marie-Therese was invited by the editor of Studio La Primitive Arts Zine, Robyn Werkhoven, to be a 'Feature Artist' in the Arts Zine which features articles and interviews with national and international visual artists, poets and writers and glimpses into their world of art and their creative processes. The article, which features Marie-Therese’s art practice and career is titled, ' A Mapping of Anthropogenic Change' has been published in the May 2018 Issue 25 of the Studio La Primitive Arts Zine (the article appears on pages 86 - 103).
Click on the Image to view the post.

I work full time as a studio artist, researcher, author, curator, speaker and tutor. I am also the Director of Art Quill Studio, The Education Division of Art Quill & Co. Pty. Ltd. at Arcadia Vale, NSW, Australia. I teach as a casual lecturer at The University of Newcastle (Australia) and I am the former co-editor of Textile Fibre Forum art magazine.

Employing my signature techniques I specialize in the area of ArtCloth, artist printmaker books and limited edition prints.